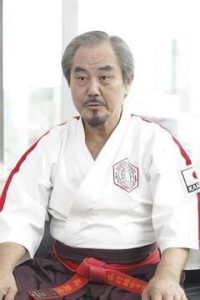 He commenced training in Karate-do and Judo at the age of three, and had attained black belt rankings in both arts by the time he was thirteen. At the age of seventeen, he entered an open karate championship and won it by successively defeating eight of Japan’s top competitors. In 1961, he met a group of Kempo practitioners who were challenging and defeating exponents of all other styles of karate-do. He won all of his fights by knockouts, crediting his victory to the method of contact training using protective equipment emphasized in Shorinjiryu Kenkokan Karate-do named Anzen Bogu “SUPERSAFE”® protector. Hanshi Hisataka has never lost a fight in karate-do competition, winning the All Japan Open Karate-do Championships in 1961 and 1962, and the Shorinjiryu Kenkokan Karate-do Championships each year from 1958 to 1962

He graduated from Nihon University holding a Fifth Dan in Karate-do and a Fourth Dan in Judo. In 1963, he traveled to the United States in order to teach Karate-do and Judo. He was asked to represent Japanese Budo at the New York World’s Fair of 1964-65, together with Shihan Hisanobu Yamazaki, Fourth Dan, and Shihan Naoyuki Okabe, Fourth Dan. Following this, he taught Karate-do and Judo in many universities, including Columbia University and the New York State University, as well as at Dojos in New York, New Jersey, Maryland, and various other states. In 1967, he was again asked by the Japanese Government to demonstrate Karate-do and Judo at World Expo ’67 in Montreal, Quebec, Canada, along with Shihan Shunji Watanabe, then a Fifth Dan. Following the completion of the Expo ’67, he remained in Montreal, teaching at McGill University, Loyola College of Montreal, CEGEP St.Jerome, and the National Theater School of Canada, as well as at the Seidokwan Academy of Karate-do and Karate Judo Nippon Schools in various Canadian provinces.

In 1974, he returned to Japan to assume the position of Chief Instructor of Shorinjiryu Kenkokan Karate-do, following Shinan Masayoshi Hisataka’s, his father, retirement from full time teaching. In the following years he experimented with various forms of protective equipment for use in Karate-do training and competition, eventually developing an advanced form called “Anzen Bogu ”. This equipment, also known as SUPERSAFE® Protector allows controlled contact, thus adding greater realism and increasing the effectiveness of the practitioner’s technique. In 1976, his first book in English was published, entitled: “Scientific Karate-do” and is still regarded by many, as one of the leading Karate-do texts, and is used as a reference today by thousands of Karate-ka worldwide.

Hanshi Masayuki Kukan Hisataka was also invited to tour throughout Europe, lecturing and demonstrating his teachings as part of the first All Japan Budo delegation, a Group which was headed by Dr. Shigeyoshi Matsumaie, Chancellor of Tokai University, President of the World Judo Federation and President of Nippon Budo Kan. In 1978, Hanshi Hisataka introduced Karate-do to Russia, then the Soviet Union, for the first time and subsequently organized and presided over the Premier USSR Karate-do Championships. He also introduced Karate-do to China for the first time since World War II. In 1979, Hanshi Hisataka officially launched the SUPERSAFE® equipment; and in the following year organized and hosted the first World Koshiki Contact Karate-do Championships, a competitive system based on the use of SUPERSAFE® equipment with Koshiki Contact Karate.

Hanshi Hisataka now holds the rank of 10th Dan in Karate-do, and is regarded as one of the world’s foremost exponents of the art, as well as the related disciplines of Bo Jutsu and Sai Jutsu. After Shinan Msayoshi Histaka, his father, passed away in 1988, he assumed the position of Head Professor of Shorinjiryu Kenkokan Karate-do, and now presides over an organization with Dojos in various parts of the world, including Japan, the U.S.A.,. Canada, Australia, Russia, Azerbaijan, Ukraine, Georgia, Venezuela, Europe, Spain, Switzerland, Germany, Netherlands, Africa, Mali, Algeria, Senegal, Ivory Coast and many other countries. He travels regularly to give seminars in these countries.