A unique aspect of Shorinjiryu Karatedo, the original style from Okinawa, is that it utilizes a system of protective gear to test the strength and effectiveness of techniques. This is accomplished within a safe environment free from injury. The system of tournament rules is designed around the Anzen Bogu chest and face guard. The protective gear system was invented by Hanshi Masayuki Hisataka. In Shorinjiryu the practitioner protects the targets and not the hands nor feet and thereby can execute a full technique similar to real world situations and applications. 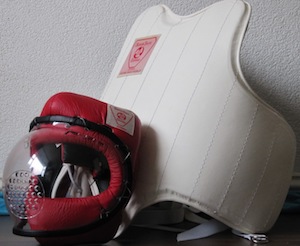 The system around the Anzen Bogu is now commonly known as Koshiki Karatedo. It is a system open to other styles of combat be them: Karate, Jujutsu, Taekwondo, MMA and other striking systems. Some interesting facts about Koshiki Karatedo and the protective gear system are:

This revolutionary score-keeping approach was first implemented in 1978 by the World Koshiki Contact Karate-do Federation. This is different from many other score-keeping approaches in Karatedo, where only the initial attack is scored and counterattacks and simultaneous attacks are not recognized. Thus, our Super Karate-do Koshiki Contact Kumite system contained within SHorinjiryu Karatedo gives contenders more opportunities to adjust and improve their skills in each match to build up higher scores over time. This helps improve every player’s technique for matches against opponents of different fighting styles and approaches.

Lastly, the clear judging system whereby points are awarded for every successful technique, which can be both clearly seen and heard, provides invaluable and direct feedback for participants. As a result, there is continuous learning for Super Karate-do Koshiki Contact Kumite players participating in the sport.