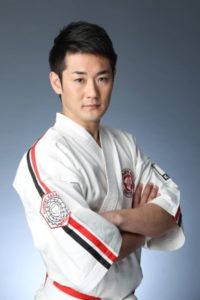 He was a student of Yasuda Gakuen High School where he also earned a 1st Dan in Judo while continuing to practice Karate. Later, he graduated from the Faculty of Bioresources Forest Resource Science Department of Nippon University. During his university studies he taught Karate in Switzerland, Hong Kong, and Indonesia.